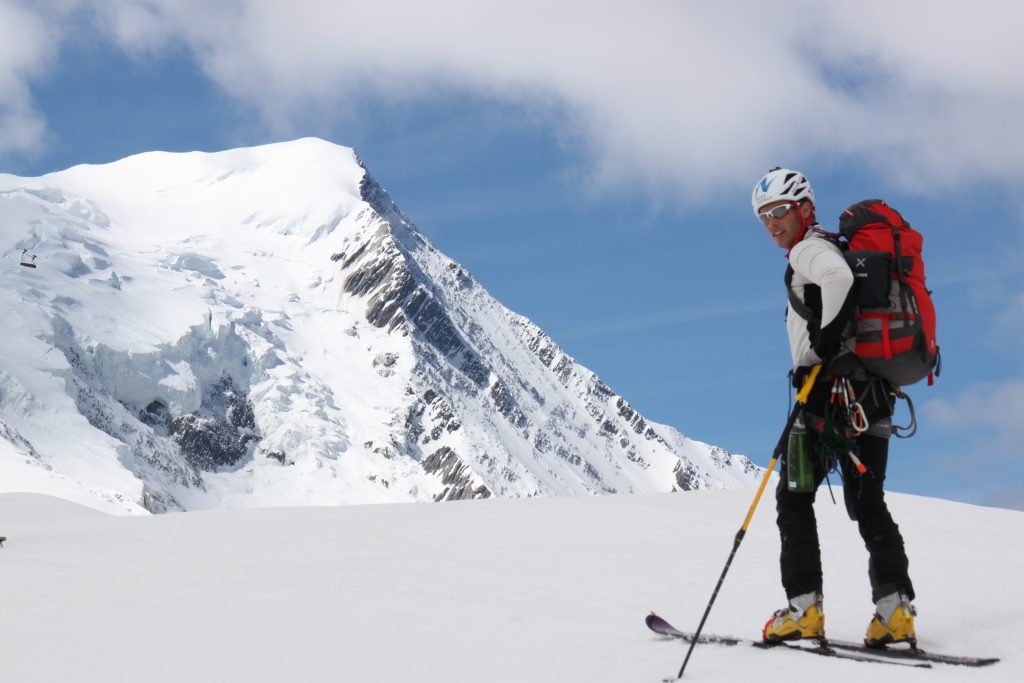 In the afternoon on Tuesday, June 11, 2013, I loaded my car to go on a trip to Mont Blanc with two friends. Our plan was to start in Chamonix and take the trail from Plan de l’Aiguille du Midi, cross the Jonction glacier, and spend the first night at the Grands Mulets hut in 3,050 meters altitude. On the next day, we went from Grands Mulets to Gouter in 3,800 meters height. On Friday we went from Gouter to the top and skied down again to Plan de l’Aiguille.
We went up with the cable car at 9 a.m. in the morning on June 12, hurried to put on the skins under our skis and began to walk. We had to be fast because seracs were hanging on the rocks above us which could fall off as soon as the sun would come up. Sometimes we could hear avalanches and seracs that went off in the distance. 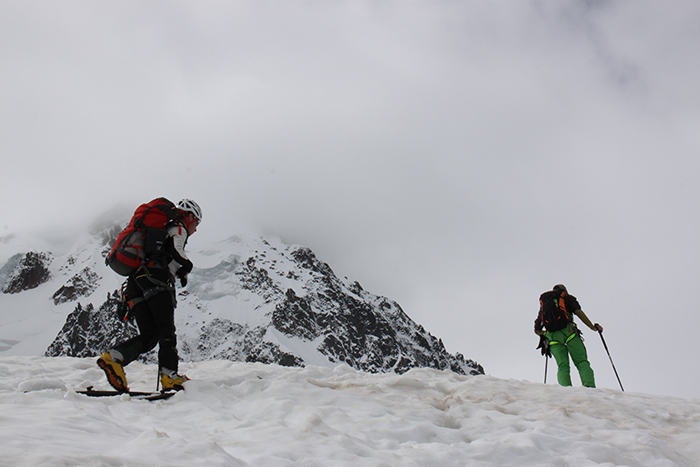 We arrived at our next little challenge when we had to cross the Jonction glacier, the most dangerous glacier on the Mont Blanc. This is a place where two glaciers run together and push the ice together. This causes bigger ice crevices and seracs. From the distance, this glacier seems impossible to cross but it is in fact possible and the conditions where favourable that day. We just needed to be fast because the later it gets the softer the snow becomes and there are more holes in the snow. Everything went fine and we were much more relaxed after this danger was over. Our hut was placed on a rock and we had to climb a little to get up there. 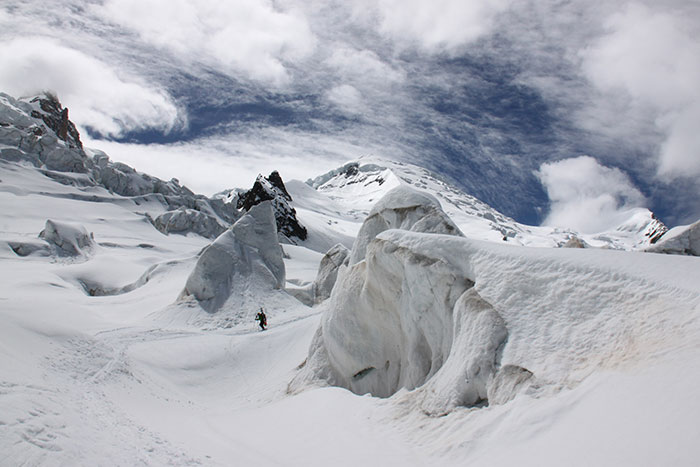 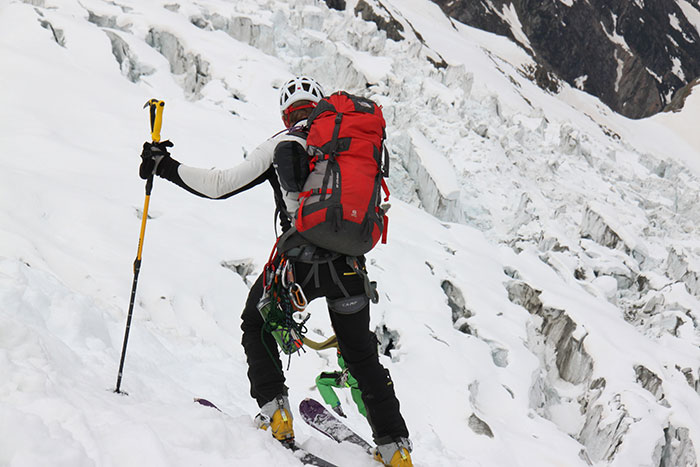 Unfortunately, the weather forecast had changed and was predicting snow for Friday. For us that meant that we could not sleep at Gouter but directly had to go from Grands Mulets to the top, so we had to hurry up much more than planned.
We only slept until 1.30 a.m. in the morning, had some breakfast and took off. We climbed up the first 800 meters in altitude with skins under our skis, zig-zag on a mountain ridge. On the left side, there was a 55 meters deep crevasse and on the right side another one, 100 meters deep. The ridge became more narrow the higher we climbed so we attached our skis to our bags, put crampons under our feet and ice axes in our hands. It was a great feeling to climb up this ridge while the sun slowly rose over the Mont Blanc. We walked a couple of hours with the crampons under our feet before we put on the skis again to finally reach the Vallot cabin at approx. 4,400 meters altitude. 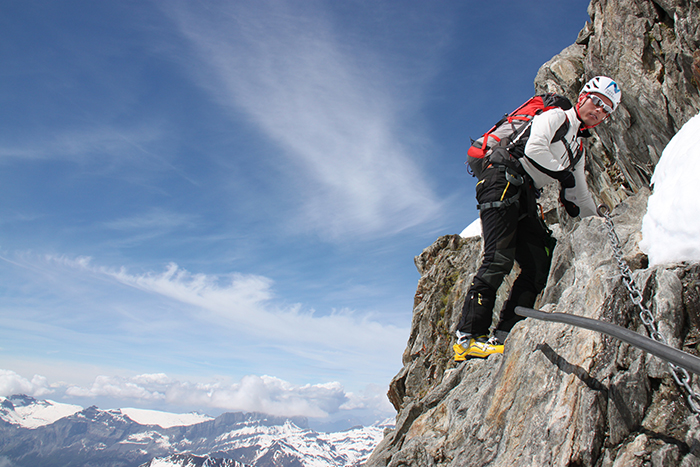 Now there was just one mountain ridge left to climb but it was too late as it was already 9 a.m. in the morning on a very sunny day and 0 degrees in 4,000 meters height. We calculated that we had about 1, 5 hours to climb up to the top and the same amount of time to descend again. So we would have been down again at noon but that was too dangerous with the temperatures we had. We decided to stop which was frustrating. But the Mont Blanc is serious, you can really hurt yourself if you don´t take the right security measures. It was the only right thing to do.

Everything happens for a reason. We got the jackpot: downhill skiing in absolutely great snow, 10 cm. Slush ice on a hard base, snow in which you are able to reach speed up until 100 km/h. The snow stayed that great until 3000m altitude, after that it was very wet. We took the same way across the Jonction glacier. At one point I could hear a loud noise coming from the rocks above me, I didn´t even have the time to look up and it was directly over my head. I just closed my eyes and thought that now I would get smashed by 100 tons of ice directly on my head. Two seconds later I looked up anyway and saw a sport airplane crossing between the rocks. I literally aged 10 years in that moment!

It was amazing to ski at the Mont Blanc. It was annoying that we couldn´t climb up to the top but there are still a couple of things I want to try out at Mont Blanc, like climbing the Dente del Gigante. So I might get another chance to try to reach the top. 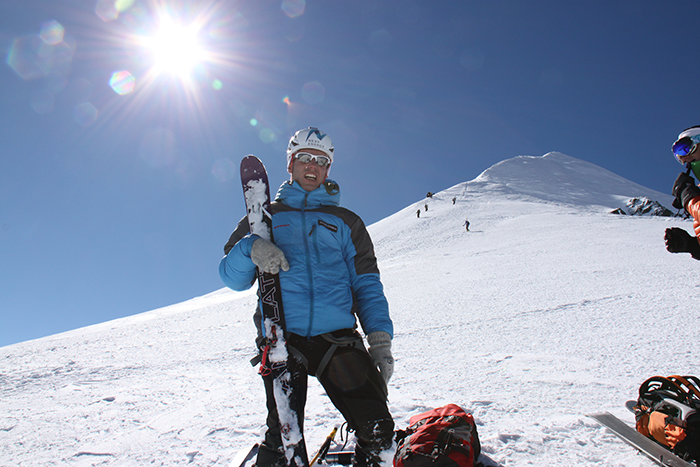 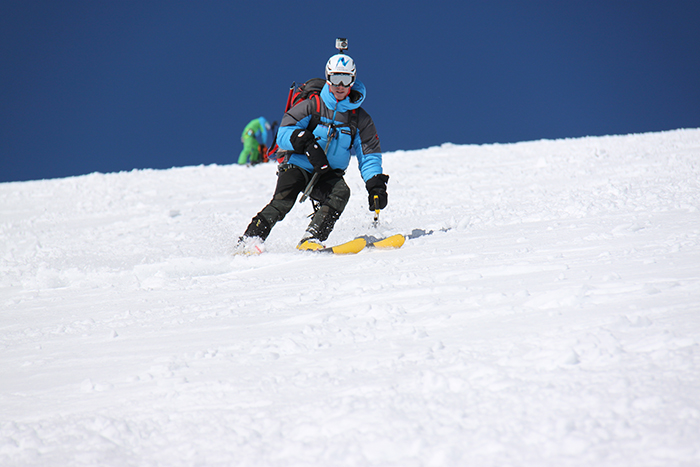