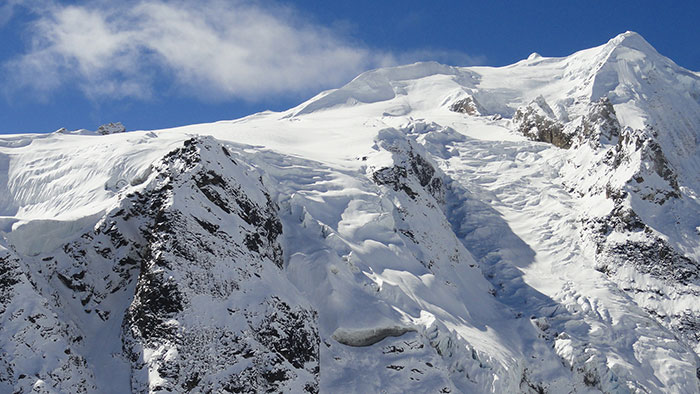 On October 9, 2013 I landed in Kathmandu, Nepal.
My first impression of Kathmandu was like the first time I was in a Go-cart hall, traffic like in no other place on earth. But the people there are simply great, helpful and always with a smile on their faces.

Together with my climbing buddy/sherpa Nima, we flew to Lukla Two days later to meet our porter Galzen. Here we also started our trekking trip towards Mera base camp.

The first two days went really well since we had good weather. I felt some symptoms of altitude sickness on the second day when we went across a mountain pass at 4,700 meters altitude but it wasn´t anything severe.

On the third day, it began to rain because a hurricane was running over India. We had to walk through rain and snow for three whole days. At one point we could not continue because there was just too much snow. We had to wait one day until somebody from the base camp came down to clear a trail for us in the snow.
The weather was much better the next day and 200 people came down from Khare camp in 5,000 meters who had been trapped up there because of the snow.
Rescue helicopters were flying above us the whole day, which wasn´t a good sign. When we arrived at Khare we were informed that the base camp had been smashed by an avalanche. Fortunately, nobody had been in the tents at the time of the avalanche because they had all been higher up in the mountains. However, they had been trapped there for 4 days without gas, water or food. On the first day with good weather they were all rescued, all of them with frostbites. Unfortunately, the three people on the other side of Mesa base camp being taken by the avalanche weren´t that lucky…
We chose Khare to be our base camp because with all the snow the other camp we actually chose wouldn’t have been stable for at least one more week. 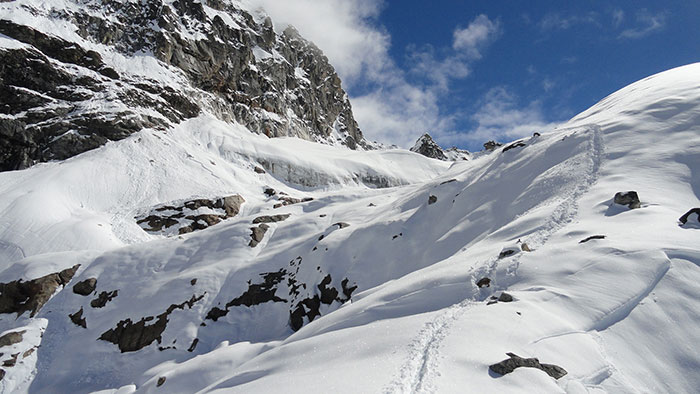 We chose Khare to be our base camp because with all the snow the other camp we actually chose wouldn’t have been stable for at least one more week. 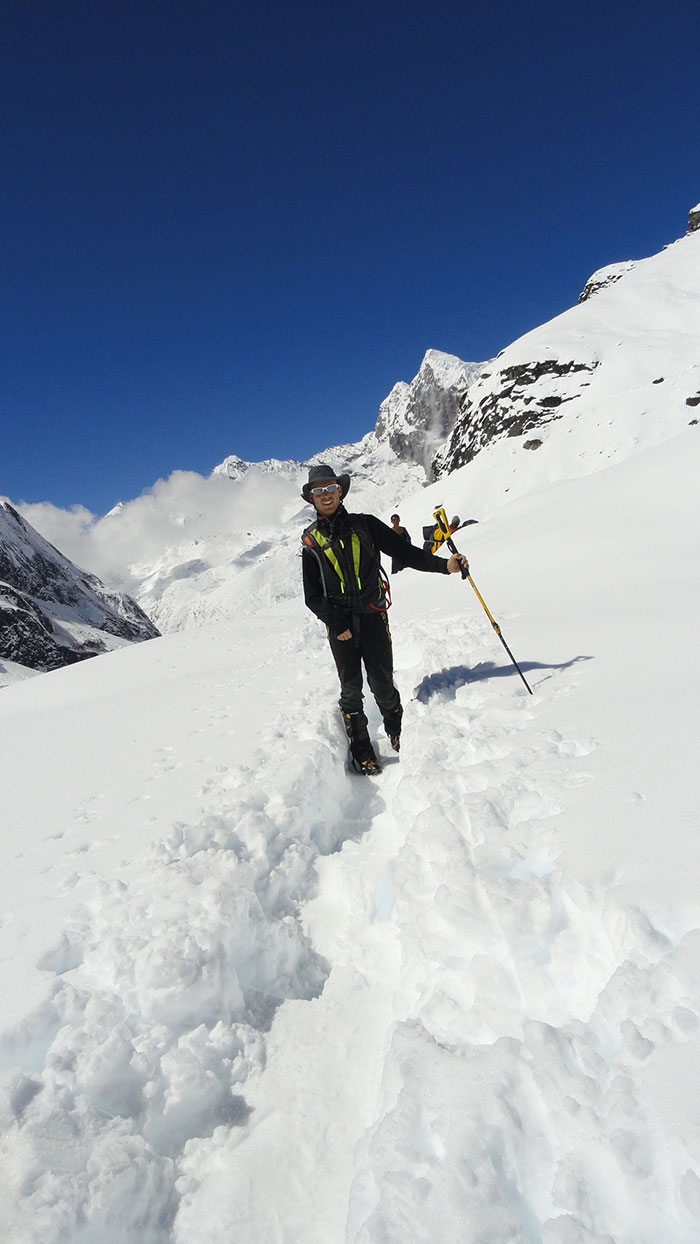 On the next day Galzen and I went for a short acclimatising trip to a rather secure place, and I tried to ski in over 5,000m altitude for the first time. The snow was heavy and I thought that it might be impossible to ski on the peak because it was hard. Thin air and heavy snow…

The day after that, so October 18, we left Khare to go to the Mera high camp on 5,800 metres. I had not slept well that night and had no appetite in the morning either. But slowly we made our way up. I could notice some symptoms of altitude sickness, my stomach was not 100% with me.
When we arrived at the camp, I tried to eat a bit but I only got sicker and sicker. In the end, I had to throw up and lie down in the tent. So no trying to reach the top that night…I had to throw up again the next morning and after that we knew that there was only one way out. DOWN!
Nima placed me on my skies. The first 200 meter were extremely hard but after that I began to feel better and I even started to enjoy the two meters of powder snow under my feet. I reached Khare with the biggest smile on my face. 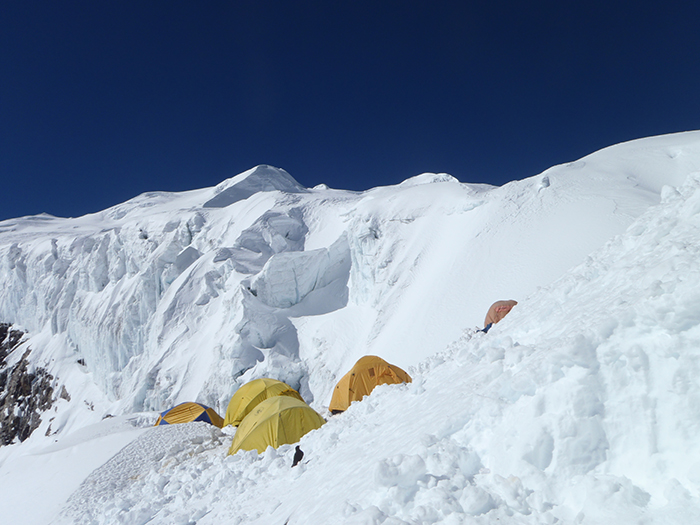 On October 21, we started one more time from Khare with the destination High camp. This day was completely different and I was on top of my game. When we arrived at High Camp, I felt great and had appetite.
I fell asleep in my nice and warm sleeping bag until Nima woke me up again at 1.30 a.m. Outside of the tent the weather was great. It was a clear sky and normally this means it is quite cold. But since I don´t have any problems with coolness, everything was alright.
We left High Camp at 2 a.m. as one of the first groups. I believe the temperature was around -15 to -20 degrees with wind speeds of 60 to 70 km/h blowing right in our faces. But it was a beautiful morning. I had to stop walking and admire the mountains behind us as they were beginning to look reddish. On the one side there was full moon, on the other side the reddish mountains as Nima shouted: “Look up!” There was a shooting star flying only 50 meters above our heads. I took out my camera to take a picture but these 20 seconds that it was out in the cold were enough for it not to work. But I will always be able to keep this picture in my head. I was very tired and had to stop after ten steps to breathe in. In an altitude above 6,000 meters there is less than half as much oxygen in the air than on sea level.

We reached a place just below the top where we had shelter from the wind and where we could rest for a while. We left our skis there and climbed up the remaining 20 meters of ice wall that was in between us and the peak. On the 21st of October, 7 a.m. we had done it! 6,460 meters, the highest altitude I had exposed myself to so far! A pat on the shoulder, casting a look around to see all the 8,000 meter peaks, time for taking two pictures and rappelling downwards again because it was freezing up there. 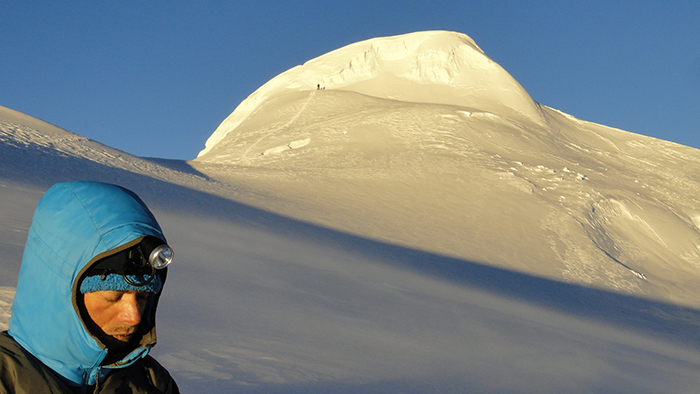 By now we could feel all the depletion from the night. On with the skis and downwards again. We were greeting the ones that still were on their way up. I had never imagined before that driving curves on skis could be that hard. We drove two or three curves, stopped to breathe and look out for crevasses! Back at the High Camp, we got something to eat and rested a little. After that I felt capable for more skiing again.

We packed our tent and our stuff and drove down to the Base camp where we slept. The following day, we went back to Lukla where we arrived on October 25 were I had the coldest but best shower I ever had. We had a little party that night and the next day we flew back to Kathmandu.

Nepal is an amazing country, the people are always happy and smiling and the Himalayan Mountains are great for trekking trips or expeditions. To ski downhill and see the Everest meanwhile was a mind-blowing experience for me. This was definitely not the last time I have set foot into this beautiful country. 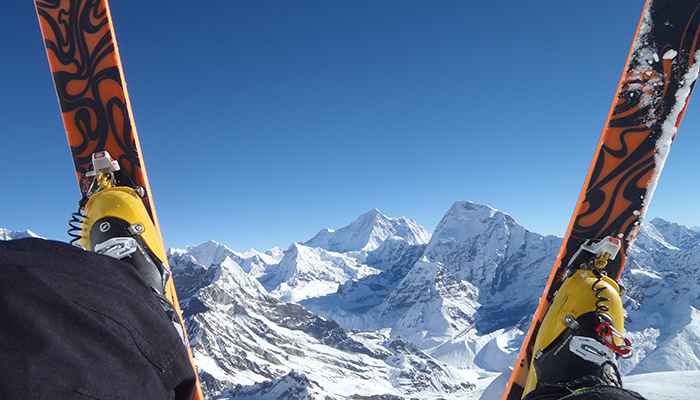 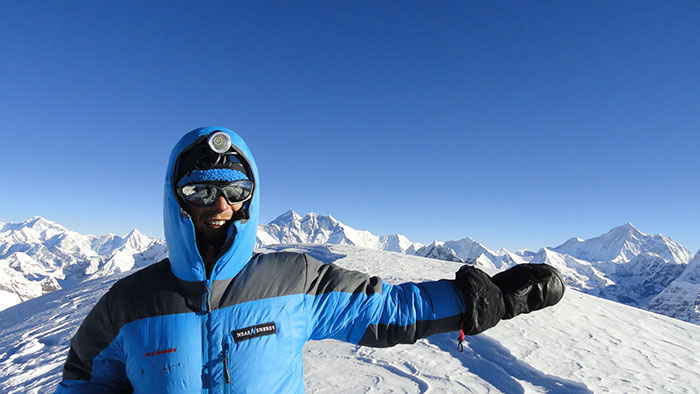