In October 2012, a friend of mine, Anna, and I made a spontaneous trip to the Mont Blanc glacier. We took a tent and spend three days there to acclimatise because three days later we had planned to go to Africa to climb the top of Mount Kilimanjaro, the Uhuru peak.

Mt. Blanc and Kilimanjaro are two completely different mountains. Mount Blanc is a real mountain with high mountain sides, ice and snow, where you need ropes, crampons and ice axes to be able to move around and to avoid falling down in 70 meters deep ice crevices. The Kilimanjaro, however, is a volcano (rather a high hill than a mountain).

We arrived at Courmayeur at the foot of the Mt. Blanc and took the lift up to the Torino hut in around 3,300 meters height. It was snowing, foggy and -10 degrees. We put on our crampons, tied a rope between us and went to the glacier to find a place for our tent. We built the tent, made us some dinner and crawled in our sleeping bags because the weather left us no other choice but to sleep. 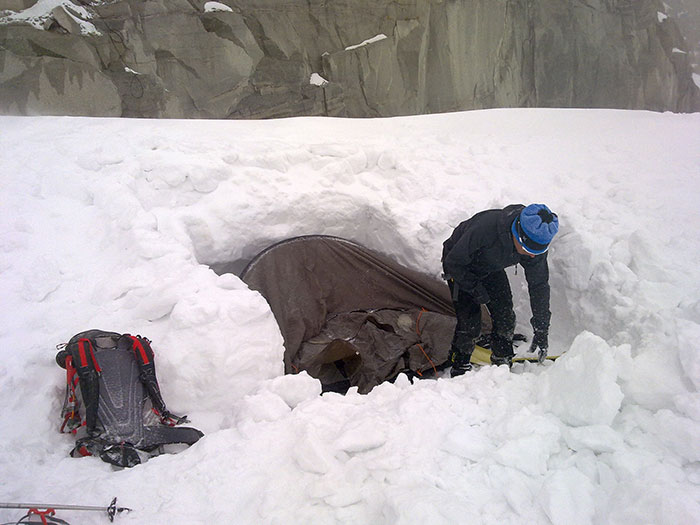 When we woke up the next morning, it was very hard to get out of our sleeping bags and into our boots as it was -15 degrees cold outside. But when we opened our tent and saw the blue sky, the mountains and the enormous glacier, it suddenly made perfect sense to us to sleep in a tent at -15 degrees.

We packed out stuff, made breakfast and melted some of the snow to make some tea for the trip. It took us the whole day to hike and climb up small mountain tops. We were back at the tent at 6 in the afternoon, right on time for a breath-taking sunset.

The next morning, we got up at 6 a.m. to see the sunrise. After that we prepared some food and packed all our stuff to go for a short trip to a rock that´s called Dente del gigante (Giant´s tooth). Having seen that, we left the most beautiful glacier I had seen so far. We agreed that this wasn´t our last visit to the glacier and made plans to come back in spring 2013 for a trip to the top of Mt. Blanc with our Randonee skis. 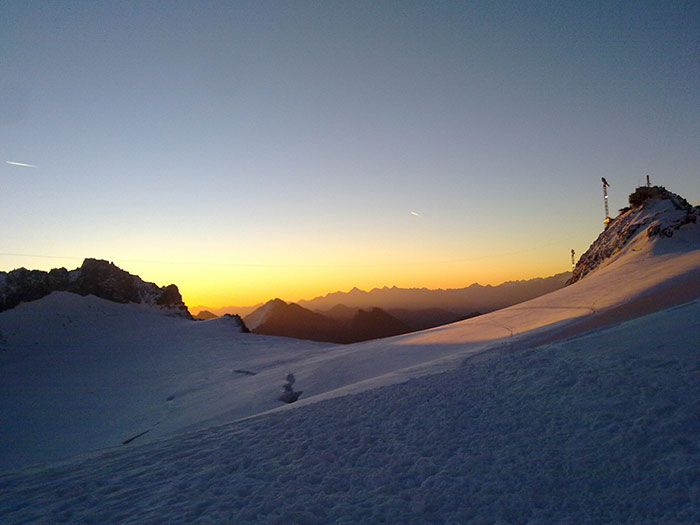 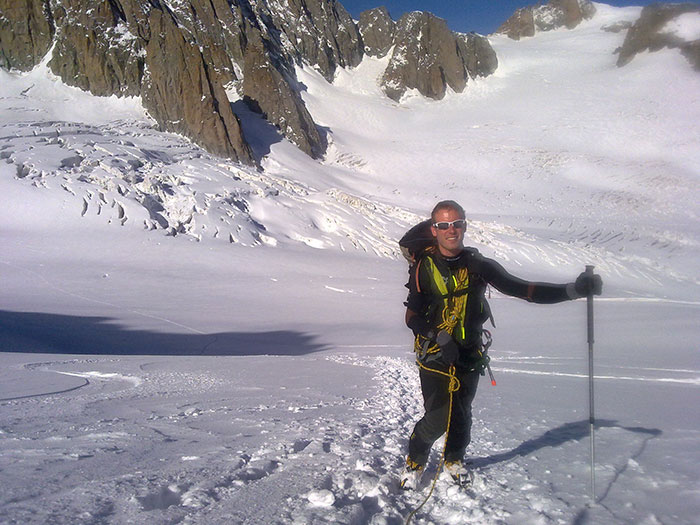 The Uhuru peak on the Kilimanjaro is Africa´s highest point with 5,895 meters height. It is one of the seven summits.

From a technical point of view, the mountain is not difficult to climb. It rather is the height and the few time there is to acclimatize (5-6 days on the mountain), which makes it difficult to climb this mountain. A lot of people get symptoms of altitude sickness. You need to pass three climate zones on the way up to the peak. The two first days we had rainforest climate with 30 degrees, on the third day we went through the zone called Alpine Desert and on the fourth day we had ice caps (and a small glacier) with -20 degrees.

We were a group of 6 that took off from the gate at 1,800 meters and went up through the rainforest. On a mountain like the Kilimanjaro it is extremely important to climb up slowly as this is the only way for the body to get used to the high altitude difference in such a short period of time. Also you should go easy on the first days and save your power for the last ones because there you need all the strength you can get. 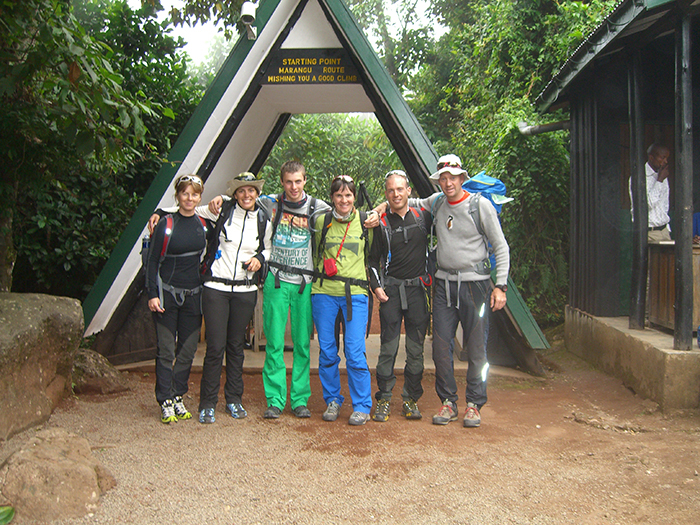 We reached the first camp at 2,600 meters after 4-5 hours. We got a cup of tea and walked up another 10 minutes to look at a volcanic crater. We took some pictures and went down to the camp again to get food and chill out a bit in our small cabin.
The next day we had a 6-7 hours walk to accomplish, the first two hours were still through rainforest after which we reached a more open landscape, and we were finally able to see the peak in the distance. Our second camp was located at 3,700 meters, which we reached at 4 p.m. in the afternoon. We also spend the next day here in order to acclimatize. On this day of rest we went for a little hike up to around 4,200 meters where we rested and chatted for an hour. After that we went down to the camp again to get dinner.
We got up at six in the morning the next day, the sunrise was marvellous and we could see the clouds beneath us. I took some pictures and crawled back into my sleeping bag. An hour later, we had breakfast and left the camp. Now finally the temperature was bearable for me as well; it had fallen under zero degrees. Our steps became slower and slower and when we finally reached our last camp we could really feel that we were standing on 4,700 meters altitude. There is less oxygen in the air and you feel out of breath much sooner. When I laid myself down to sleep, I could feel my heart hammer. We only got a few hours of sleep because we were supposed to leave the camp again at midnight to climb up to the top.

Our guide woke us up at 11 p.m. We had a little something to eat and a cup of tea and then we just put on our quilted jackets, boots and head lamps and off we went. The way was beginning to be steep in comparison to the rather plain and long stretches.
At 6 a.m. in the morning we could see the first out of three peak signs saying ”Gilmans point 5,680 meters”. Here, we took a short break and said goodbye to two of the group who suffered from altitude sickness and had to go back.

Daylight was slowly beginning to show and we could see the peak. It was right in front of us but the way was still long. 2 hours later we passed the second peak sign “Stella point”. We continued our hike on the mountain ridge. 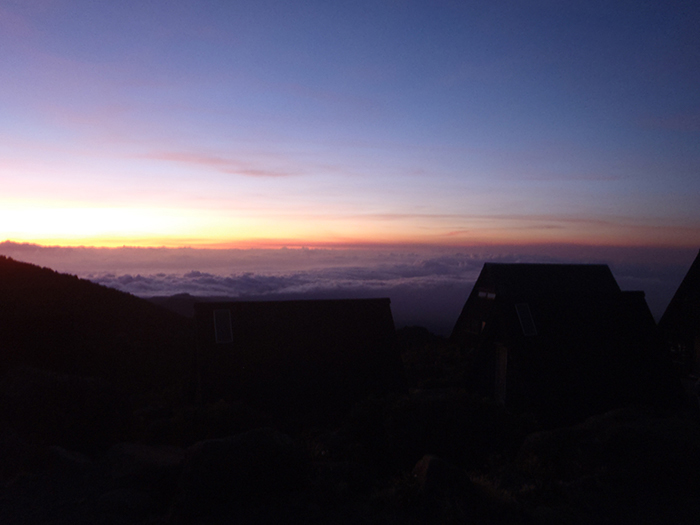 It was cold and extremely windy and around 30 minutes later we could see the last sign ”Congratulations! You are now at Uhuru peak 5,895 m”. We took a couple of pictures and videos and started to walk down again as it wasn´t very pleasant to stand around in the freezing cold and wind. I also started to feel some symptoms of altitude sickness, it felt like I was a little drunk, so I ran to get down again as fast as possible. 200 meters below the peak I tried to eat a chocolate bar and drink some tea but it just came out again. We went down together until we reached a point 1,000 meters below the peak and had a break. There I could get my stomach to keep the food.

We reached camp 2 at around 2 p.m., i.e. 14 hours after we left at camp 3 towards the peak. We stayed at camp 2 overnight and went down to the gate again the day after.
Thanks for a fantastic trip to: